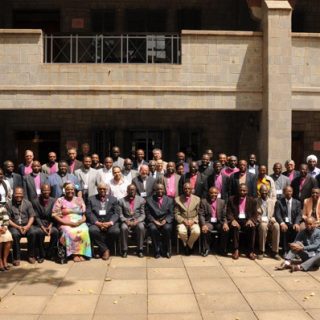 The orientation of the CAPA Commissions was held in Nairobi Kenya from 19-20 November 2015. The four commissions are:

The 2 days event brought together 6 Primates and 47 commissioners from the 13 CAPA Provinces under the theme “Releasing Potential: Realising Possibilities” John 10:10. The first day was spent orientating the Commissioners on their roles and responsibilities as well as developing the work plans.

The culmination of the orientation was the inauguration Service held at All Saints Cathedral; the Primate of Uganda Archbishop Stanley Ntagali preached powerfully during this service. Canon Kaiso then outlined the ministry of the Commissioners after which Archbishop Bernard Ntahoturi assisted by the Archbishop Chama, installed them with a symbolic CAPA scarf, commissioning them to serve Christ in the ministry of CAPA.

The second day was dedicated to sharing of the developed work plans by the various commissions. We thank God for the success of this orientation and pray that all may sustain the momentum.