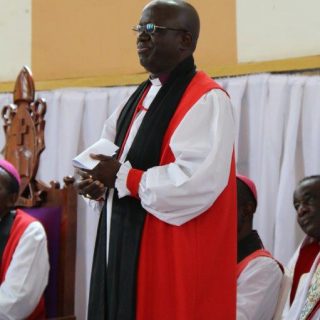 The Most Rev Albert Chama and the Most Rev Stanley Ntagali, were elected as Chairman and Vice Chairman of CAPA respectively; at the recently concluded Council meeting held in Kigali Rwanda.

Archbishop Chama, who is the Primate of Central Africa previously served as the Vice Chairman of CAPA. He takes over from Archbishop Bernard Ntahoturi of Burundi who has been Chairman since 2012.

Archbishop Ntagali is the Primate of Church of the Province of Uganda and is serving as the Vice Chairman of the Standing Committee for the first time. We congratulate the two Archbishops as the take on this added responsibility of leading the Anglican Church in Africa.

Two members re-elected to the Standing Committee of CAPA are Rt Rev Matthias Medadues-Badohu of West Africa and Canon Delene Mark of Southern Africa. New members elected are Rev LouissiaTassiana Bossy of Indian Ocean, Mrs Joyce Kwaje of Sudan and South Sudan and Mr Innocent Kamananga of Rwanda. The Standing Committee oversees the work of the Council and meets twice annually. The Council meets once every four years.

Let us continue to pray for all those elected to serve CAPA in various position for God’s wisdom and guidance.