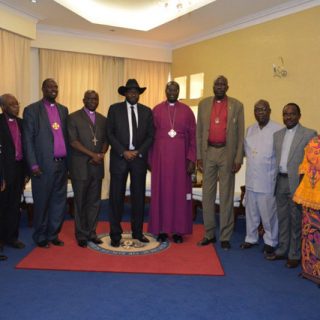 A REPORT ON THE SOLIDALITY VISIT TO SOUTH SUDAN BY THE COUNCIL OF ANGLICAN PROVINCES OF AFRICA (CAPA) PRIMATES AND THE ENVOY OF THE ARCHBISHOP OF CANTERBURY, 21 – 26 SEPTEMBER 2016.

The CAPA Primates and an envoy of the Archbishop of Canterbury undertook a solidarity visit during which they had audience with the leadership in South Sudan including, His Excellency the President, the Vice President, the Speaker and Deputy Speaker of Parliament, some Members of Parliament, the members of the Executive of the South Sudan Council of Churches, other individuals, and the British Ambassador to South Sudan.

The visit was prompted by the events of 8th July 2016, which have pushed one of the Principals to the Peace Agreement into exile thereby threatening its implementation. The citizens of South Sudan and well-wishers had anchored their hopes for the country’s stability on this Agreement.

OBJECTIVES OF THE VISIT

1. To express our solidarity with our suffering brothers and sisters

2. To listen and learn from the efforts at restoring peace and the challenges being faced, and how we and the world might come alongside them in their journey to peace. We also wanted to hear specific suggestions to consider in this journey.

3. To explore ways of bringing on board all well-wishers we can work with in bringing our influence and resources to bear on the events in this country

4. To support our fellow Religious Leaders in their efforts towards responding to the pastoral challenges in the context

THE MEMBERS OF THE DELEGATION

5. BISHOP CHARLES ODURKAMI, DEAN OF THE PROVINCE OF THE CHURCH OF UGANDA

6. BISHOP PRECIOUS OMUKU, ENVOY OF THE ARCHBISHOP OF CANTERBURY

1. HIS EXCELLENCY SALVA KIRR, The President of South Sudan

2. HIS EXCELLENCY JAMES WANI ,The Vice President of South Sudan

4. His Excellency the Ambassador of Britain to South Sudan

5. Archbishop Daniel Deng , Primate of the Episcopal Church of South Sudan and Sudan

7. The Bishops and Clergy of the Episcopal Church of South Sudan(ECSS)

9. Several other dignitaries and members of the Civil Society.

10. Members of four congregations around Juba including one at the Military Headquarters.

FACTORS BEHIND THE CONTINUED INSTABILITY IN THE COUNTRY

During the engagements we had the following issues come up as being responsible for the on-going instability and violence.

1. The breakdown of trust among the two Principals who are signatories to the Peace Agreement.

2. The increasing lawlessness which has instilled fear in the population, causing anxiety and uncertainty about the future. It has also made the travelling out of Juba by road unsafe contributing to the scarcity of food and the high cost of living.

3. The massive displacements due to sporadic attacks of villages by armed men who have pushed over 2 million people into IDP camps and 1 million to seek refuge in neighboring countries.

4. The paralysis within government institutions due to resource constraints making them unable to deliver on their mandate in terms of services and salaries for civil servants.

5. Targeted killings which are threatening peaceful coexistence among different ethnic groups with prospects of widespread killings in various parts of the country.

6. The reservation by those in Government on the proposed deployment of the UN proposed Protection Force.

The members of the delegation in their interaction with the various dignitaries, leaders of institutions and the general population offered their condolences and sympathies to those who had lost their dear ones during the ongoing conflict, and also made specific appeals as was relevant.

1. To the President and Vice President, the delegation acknowledged the efforts of their Government towards stabilizing the country through the implementation of the Peace Agreement, and underscored the need for creating an enabling environment for all citizens to reap the fruits of their liberation struggle. The delegation observed that providing leadership in a context of conflict is not an easy task, it requires patience and a big and forgiving heart. This is so because even those they disagree with are citizens with rights which cannot be ignored. They implored the two leaders to follow the wisdom in Archbishop Tutu’s saying, ‘If you want peace, you don’t talk to your friends, you talk to your enemies’.

The delegation encouraged the Leaders to resist the temptation of relying on the gun as the main arbitrator in times of misunderstanding, but rather give dialogue and conversation a chance. They pointed out that nation building is never a role of politicians alone, it needs the support of Civil Society, Cultural Institutions, Religious Institutions as well as the International Community. They therefore encouraged the Leaders to pay regard to the guidance of these institutions and to create a mechanism through which they can be supported to play their roles. In reference to Moses whom God used to deliver the children of Israel from their suffering in Egypt, they pleaded to the Leaders to allow God to use them to bring an end to the suffering of God’s people in South Sudan, now scattered and living in deplorable conditions in refugee camps. The President appreciated the delegation and declared his commitment to bring an end to what he called a senseless war. He requested the religious leaders to carry this message of peace to all the communities in the Country. He noted that he had reservations about signing the Peace Agreement because of certain clauses which he needed to be reworked but the International Community did not take his concerns seriously; he added that these are some of the clauses creating obstacles to the implementation of the Agreement. Similarly, his Government has issues with the proposed UN Protection Force which need addressing before they are deployed, and appealed to the International Community to appreciate their concerns to avoid any complications in the future. A prayer was offered for the leaders and the nation.

3. To the South Sudan Council of Churches Executive Committee, the delegation commended their peace building efforts and their continued support to victims of the conflict through provision of pastoral care and in responding to their humanitarian needs. The Chairperson of the Council and the Roman Catholic Archbishop underscored the need for effective accompaniment of the Ecumenical family in the region, and the delegation took note of this. It was agreed that a well thought through framework needs to be developed to enable effective engagement with the realities in the context. The General Secretary of CAPA, Rev Canon Grace Kaiso, given his experiences in Uganda was encouraged to work closely with the SSCC Team in this process.

4. To the Bishops, Priests, and staff of the Women and the Development wing of the Episcopal Church of South Sudan, the delegation expressed their deep anguish regarding the insecurity that had displaced several Bishops and priests from their Dioceses. They appreciated their distant grief regarding their inability to be in the midst of their suffering congregations. Most of these leaders had no place to stay and were separated from their families. The leader as well as the rest of society is traumatized. Ms. Harriet Baka, the women’s department worker narrated the incredible violence that women were facing during these turbulent times. Some of the leaders decried the lack of unity which was making it difficult for religious leaders to play their role in the ministry of reconciliation in the wider society. The Archbishop narrated his efforts towards peace building which on many occasions almost cost his life. He appreciated the solidarity visit and pleaded with CAPA to maintain the momentum towards stabilizing South Sudan, without which the whole Great Lakes region is going to suffer. The delegation appreciated the challenges of ministering in a highly polarized environment; they encouraged the leaders to strive to be the Salt and Light. Some of the members of the delegations shared their experiences as a way of reassuring the leaders of the faithfulness of our God to those who seek to serve His will.

The delegation accepted the challenge of keeping the momentum, and noted that by not focusing on peaceful coexistence and serving the common good, we are cheating ourselves of a more promising future. Prayers were offered for the church and the nation.

Members of the delegation preached in three different parishes, and challenged those present to put a high premium on national solidarity beyond ethnic and political party loyalties. Nation building is a collective effort and makes demands and bestows certain responsibilities on all citizens. The Christians were encouraged to lead the way.

The delegation held seven press conferences during their visit and would like to appreciate the extensive coverage of the engagements by the press that the delegation had with different leaders through the newspaper, radio and television.

1. CAPA should, in partnership with ECSS, Lambeth Palace and Anglican Alliance, keep the momentum going on the issues affecting peace in South Sudan.

2. CAPA in partnership with ECSS, SSCC, Lambeth Palace and the Anglican Alliance should continue to rally support for the displaced and refugees; and place before the global community the challenges faced by vulnerable groups including people with disabilities, children, women and the elderly.

3. Gather sufficient information to enable the development of a framework for sustained engagement

4. Carry out a mapping exercise of personalities and institutions whose influence could bear positive influence particularly if they are re-envisioned towards peace building.

5. Visit one of the Principals who is currently in exile, and maybe others, with the view of understanding their grievances and seeking their pledge to lay down arms and embrace dialogue.

6. As a start, representatives from other CAPA Provinces could accompany the religious leaders in South Sudan to conduct Peace rallies in various regions of the country including the IDP camps. They should also visit those in refugee camps in neighbouring countries of Uganda, Kenya and Ethiopia.

7. Re-energize the Priests and other religious leaders, through retreats and psycho-socio support programs, so that they can carry out their pastoral responsibilities more effectively.

1. CAPA will work closely with the ECSS to enable an ecumenical approach to all processes and interventions.

2. Efforts to mobilize potential donors will be undertaken both denominationally and ecumenically.

3. Relevant Government Institutions, foreign embassies and others organizations will be kept abreast with all plans and interventions.

4. All interventions will be guided by a well thought through framework developed in a consultative process involving all stakeholders.

The delegation would like to appreciate Archbishop Daniel Deng, the Provincial Team and the organizing committee for the meticulous preparations which ensured that the delegation achieved their objectives. The members of the delegation had such a rich experience of the hospitality of the South Sudan People despite their enormous challenges. We appreciate His Excellency the President, the Vice President, the Speaker, Deputy Speaker and Members of Parliament and the British Ambassador for taking their time to meet and deliberate with the CAPA delegation. Many thanks to the Members of the South Sudan Council of Churches, the Bishops and Priests of The Episcopal Church of South Sudan for welcoming us and sharing with us their pain, frustrations and hopes. The congregations where the delegation worshipped, their gifts, and the welcome dinners by the Archbishop and the Diocese of Juba went further to demonstrate the strong bonds of sisterhood and brotherhood that bind us in Christ. We also would like to appreciate those who provided security and the drivers who worked under tight schedules.

The CAPA delegation left South Sudan with a heavy heart regarding the on-going suffering of the brethren in this beloved country. However, we believe that God is able to do infinitely more than all we ask or imagine, according to His power that is at work within us (Eph 3:20). We are committed as part of the Faith fraternity to pray and work with all people of goodwill towards moving from mere words of resolve to investing in processes that will lead to the rebuilding of peaceful, cohesive, just and thriving communities in South Sudan.